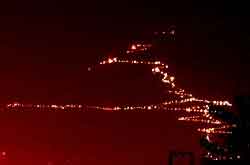 The Jammu and Kashmir Government today allowed opening of all religious places and places of worship in the Union Territory for pilgrims from August 16 but kept religious processions and large religious gathering prohibited till August 31.

The decisions were announced by Chief Secretary BVR Subrahmanyam who also happens to be the Chairperson, State Executive Committee and will be effective from tomorrow except the religious places for which separate Standard Operating Procedure (SOP) will be issued.

The pilgrimage was stopped in the middle of March following breakout of COVID Pandemic. Shri Mata Vaishno Devi Shrine Board (SMVDSB) which manages affairs of the centuries old shrine has made all arrangements for resumption of pilgrimage by taking into account the COVID management like social distancing, regular sanitization of all places, wearing of masks etc. It will come out with guidelines of the yatra shortly.

The Government has permitted all religious places/places of worship to open for pilgrims from August 16 subject to an SOP which will be issued separately. However, religious processions and large religious gathering will remain strictly prohibited, the guidelines state.

All cinema halls, swimming pools, entertainment parks, Spas, theatres, bars, auditoriums, assembly halls and similar places will remain shut. In the limits of Municipal Corporations, shops will remain open from 9 am to 7 pm.

The Government has asked the District Magistrates to ensure that there is no congestion and social distancing is maintained. It added that inter-district public passenger transport vehicles will be run by JKSRTC only with up to 2/3rd seating capacity for buses and up to 50 percent seating capacity for mini-buses on routes to be notified by the Transport department.