Celebrated every year on the 13th of January, Lohri is one of the famous festivals of Jammu

Surrounded by the fog of winter when activity becomes subdued, people make bonfire to mark the celebrations of Lohri. Particularly celebrated in North India, Lohri is the festival dedicated to the Gods of Sun and fire. Celebrated every year on the 13th of January, Lohri commemorates the harvest of winter (Rabi) crops. Jammu & adjoining Punjab being the agricultural state observes this festival with enthusiasm and exuberance. With the month of Paush coming to an end and the sun moving north from Makar (Capricorn), Lohri warms the hearts of thousands of people across Jammu and Punjab as well as Himachal Pradesh. 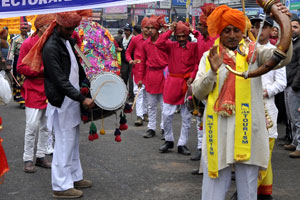 History & Origin - Originally lohri was the cultural celebration of winter ending. At that time Lohri was celebrated on winter solstice day which is the shortest day and the longest night. After Lohri the duration of days used to increase and the duration of nights used to decrease. However now it is celebrated on Makar Sankranti according to the Hindu calendar.

Many socio-cultural stories are combined with this festival. The most popular folk-lore is about Dulla Bhatti. Dulla Bhatti was the Raja of Pindi Bhattian and part of a Rajput tribe that came to India during the era of Akbar. The poor used to see Dulla as their rescuer. He used to steal money and goods from the rich landlords and feed them to the deprived people. People of the area respected and loved him. He used to rescue girls who were being sold off as slaves in the Middle East market. He would then get them married to boys of the village and even provide money for marriage. A famous tale of Bhatti involves him saving a poor girl from kidnapping. Later he adopted that girl as his own daughter. Many folk songs sung on Lohri are based on Dulla and his bravery.

Celebrations - A traditional dance called the 'Chajja' marks the celebration on the occasion of Lohri. The whole atmosphere of Jammu comes alive with people dancing in procession on the pulsating drumbeats. During the day children go around their neighbourhood singing folk songs and asking for treats. The children are welcomed in all houses and feed with sweets and candies. Sometimes they are also given money. It is a special affair for families with new born babies and newlywed couples. Feasts are arranged for the people as Lohri is festival of fertility and is very important for the baby and new bride. The celebrations in these houses start since the morning with Dhol beats and dancing to mark the happiness. Excitement of the evening is combined with delicious preparations, festivity and bonfire rituals.

In the evening the much awaited bonfire is lit in houses and harvest fields. People gather around the fire accompanied with traditional dancing and songs. People dance to the beats of the Dhol. The most common dance forms performed are Bhangda and Gidda. Circling around the fire also known as parikrama is a form of prayer asking Gods for blessings and prosperity.

Offering to the Gods also known as Prasad consists of peanuts, popcorn, rewari and til. This time of the year sugarcane is harvested so servings of sugar preperations like: gajak and rewri are offered to Gods and distributed among the family. Makki ki Roti (multi-millet hand-rolled bread) and Sarson ka Saag (cooked green leafy herbs) are the traditional dinner food for the special day.

Lohri is important for the farmers as it marks the beginning of the new financial year for them. Parents give presents to their married ones wishing them happiness and health. This festival is combined with celebration of pongal in Tamil Nadu, Magha Bihu in Assam, Tai Pongal in Kerala all celebrated on the auspicious day of Makar Sankranti.